An Ethic of Transparency

From The Episcopal Cafe:

As regular Web travelers know, freedom of expression and Christian charity are sometimes in conflict in the blogosphere. At Episcopal Café, we hope to establish an ethic of transparency by requiring all contributors and commentators to make submissions under their real names...

I initially was uncomfortable with this policy, but after giving it some thought, I've come to see the wisdom in it. If our contributions to the conversation are to be of value, an ethic of transparency, of honesty, needs to be upheld.

No, I'm not going to adopt this policy at Jake's place. As one who has used a nom de plume for many years, I understand the need some folks have to protect their privacy. However, I am encouraging those who are comfortable doing so to begin using their real names.

To launch this effort towards more tranparency, it seems appropriate to begin with myself. Even though my real name has been associated with Jake's place for some time, including even in the New York Times, I think it is necessary to officially "out" myself. 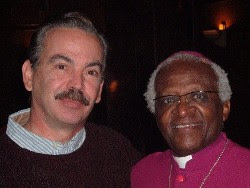 Hello. My name is Terry Martin, and I am an eclectic and sometimes eccentric Episcopal priest. I'm the one in the picture not wearing purple. I would imagine that most of you recognize the gentleman standing with me.

In an attempt at further transparency, I will tell you that I began in the diocese of Fond du Lac and received my M. Div. from Nashotah House. During my first year at the House, I preached a sermon in my home parish that attacked Bp. Spong. The parish gave me a standing ovation, which is quite unusual in TEC. My stance on inclusivity began to shift during my second year at the House, under the instruction of such great minds as Jim Griffiss, Joe Hunt and David Ruppe.

My thoughts here at Jake's place do not represent the opinions of my diocese or the congregation in which I serve. As a priest, I understand my role as being one called to stand in the center, calling all those entrusted to my care to grow into the full stature of Christ. There are no outcasts. Jake represents my own thoughts, which are not always appropriately expressed within the environments in which I have been called to serve.

I'll be changing the "about Jake" page to include some of this information.