Don Armstrong, the former Episcopal priest who jumped to the Church of Nigeria the day before charges of theft against him were revealed, is in the news again:

...A Fourth Judicial District grand jury indicted Armstrong in May 2009 on 20 felony counts of embezzling $392,000 from Grace Church. Armstrong on Friday pled no contest to one felony count, according to El Paso County court files. Though Armstrong in his plea doesn’t admit guilt, the court views it in a legal sense as a guilty plea.

As part of the agreement, Armstrong admitted guilt to a new charge, misdemeanor theft, said Pueblo District Attorney Bill Thiebaut. A sentencing hearing on this charge will happen before the end of the year.

Armstrong’s sentence could include a fine of up to $5,000 and up to 18 months in the El Paso County Jail. Misdemeanor charges are brought for thefts between $500 and $1,000.

On the felony count, Armstrong has been placed on four-year’s probation. If violated, he will be a convicted felon and could face four to 12 years in prison, Thiebaut said. A restitution hearing will be held, probably in January, to determine how much money Armstrong must pay back to Grace Church....

The Episcopal Diocese of Colorado offers us a little more information:

...Larry Hitt, the Chancellor of the diocese, said that “We believe that Armstrong’s entry of a ‘no contest’ plea to a class 3 felony theft charge (deferred judgment and sentence) and his effective guilty plea to a class 1 misdemeanor theft charge constitute a tacit acknowledgment of the truth of the criminal charges against him. We hope that today’s action will contribute to a final resolution of these regrettable events. We pray for healing for all affected by his actions, including Armstrong and his family. We also hope that he will be sentenced to make full restitution of the money he took from the church.”

So, is this a "tacit acknowledgment" of the truth of the criminal charges? Not according to the members of his new church:

...In preparation for the now canceled trial we have become convinced even more strongly that controversies within the larger denominational church were the catalyst for the Diocese’s investigation and complaint, for the purpose of silencing our bold and successful defense of orthodoxy through our parish’s life, discipline, and teaching ministry...

...We further believe the disparity between the magnitude of charges made against Father Armstrong by the Episcopal Diocese and the final content of the plea agreement vindicates not only Father Armstrong, but also clearly affirms our confidence that we ran an effective and well managed church in our days at the helm of Grace & St. Stephen’s Episcopal Church, and continue to do so at St. George’s Anglican Church...

Vindicates? Oh come on. How can these folks be so blind?

Perhaps we need to remind them of some of the details unearthed in the initial investigation:

.... In about March 2003, after Fr. Armstrong’s conversation with Ms. Ressler, payments for the educational expenses of Fr. Armstrong’s children ceased being booked as a Bowton Trust expense. Bookkeeper Alice Snere recalls that Fr. Armstrong instructed her in March 2003 to stop booking these expenses to Bowton and to book them to Anglican Institute or ACI as outreach expenses. He instructed her to transfer enough funds from Grace Church’s operating account to ACI’s operating account to cover the monthly payments for the children’s tuition and Jessie Armstrong’s car lease...

...Grace Church’s management provided to the parishioners a “2005 Outreach Report” itemizing the 2005 sources of funds for outreach (which it listed as “Receipts”) and the spending of funds (which it listed as “Disbursements”). Specifically, it stated that Grace Church disbursed “$40,116.00” for “Anglican Communion Institute.” That amount is the product of 12 months times $3,343, or the monthly payments Grace Church made to “Donald Armstrong - College Fund” during the 12 months of 2005 and booked to ACI outreach. The QuickBooks data for 2005 show no disbursements to ACI for the entire year...

The Pueblo District Attorney found items like the above as valid reasons to charge Armstrong with 20 counts of felony theft. 19 of them would probably be thrown out, because of the statute of limitations. So he pleaded "no contest" to one felony charge.

But, he admitted guilt to "misdemeanor theft." This is usually the charge when someone is caught shoplifting.

Now, if I was convicted of shoplifting, do you think my Bishop might step in and inhibit me immediately? You betcha. And rightly so. But, so far, we've not heard a word from Armstrong's Bishop, or the Church of Nigeria.

I suppose we shouldn't be surprised. What's a little petty theft to pillagers in purple shirts who regularly steal property, and do it in the name of God, no less.

Birds of a feather and all that.

I recently received the latest Abbey Newsletter from St. Gregory's Abbey. Among the various spiritual offerings in this issue was the following photo from their Fourth of July activites: 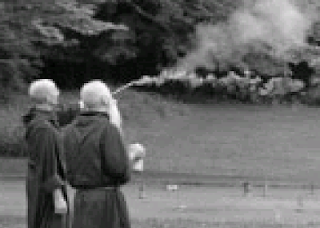 Now, good Prior, what some of us would like to know is what was the exact mixture that you were smoking that caused such a marvelous cloud? And, is such smoke making a spiritual discipline that you would recommend?