The Evangelicals Rush to War

Charles Marsh, professor of religion at the University of Virginia, offers us an essay in the Boston Globe entitled God and Country. Here's part of it:

...Why did American evangelicals not pause for a moment in the rush to war to consider the near-unanimous disapproval of the global Christian community? The worldwide Christian opposition seems to me the most neglected story related to the religious debate about Iraq: Despite approval for the president's decision to go to war by 87 percent of white evangelicals in April 2003, according to a Pew Charitable Trusts poll, almost every Christian leader in the world (and almost every nonevangelical leader in the United States) voiced opposition to the war...

...These past six years have been transformative in the religious history of the United States. It is arguably the passing of the evangelical moment -- if not the end of evangelicalism's cultural and political relevance, then certainly the loss of its theological credibility. Conservative evangelical elites, in exchange for political access and power, have ransacked the faith and trivialized its convictions. It is as though these Christians consider themselves to be recipients of a special revelation, as if God has whispered eternal secrets in their ears and summoned them to world-historic leadership in the present and future...

...Franklin Graham, the evangelist (and son of Billy Graham), boasted that the American invasion of Iraq opens up exciting new opportunities for missions to non-Christian Arabs. This is not what the Hebrew or Christian prophets meant by righteousness and discipleship. In fact, the grotesque notion that preemptive war and the destruction of innocent life pave the way for the preaching of the Christian message strikes me as a mockery and a betrayal.

But if Franklin Graham speaks truthfully of the Christian faith and its mission in the world -- as many evangelicals seem to believe -- then we should have none of it. Rather, we should join the ranks of righteous unbelievers and big-hearted humanists who rage against cruelty and oppression with the intensity of people who live fully in this world. I am certain that it would be better for Christians to stand in solidarity with compassionate atheists and agnostics, firmly resolved against injustice and cruelty, than to sing "Amazing Grace" with the heroic masses who cannot tell the difference between the cross and the flag. 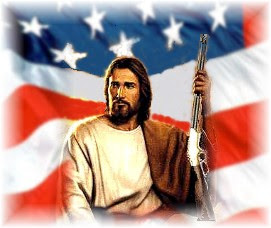 One would hope that we are seeing the American evangelicals' trend of depicting Jesus as the new Rambo finally coming to an end. Enough innocent blood has been shed because of our President's most un-Christian adventure in Iraq.

The damage already done to the good name of the United States of America may never be repaired. But that is almost a secondary tragedy to me. The damage that has been done to the name of Jesus Christ breaks my heart.

In the name of God, clear the troops out of Iraq, and get rid of the fanatics suffering from megalomania in the White House.