Susan Russell points us to an article from the BBC:

"God must be weeping looking at some of the atrocities that we commit against one another.

"In the face of all of that, our Church, especially the Anglican Church, at this time is almost obsessed with questions of human sexuality."

Criticising Dr Williams, he said: "Why doesn't he demonstrate a particular attribute of God's which is that God is a welcoming God"...

...He said the Anglican Church had seemed "extraordinarily homophobic" in its handling of the issue, and that he had felt "saddened" and "ashamed" of his church at the time.

Asked if he still felt ashamed, he said: "If we are going to not welcome or invite people because of sexual orientation, yes.

"If God, as they say, is homophobic, I wouldn't worship that God"...

...In the interview, Archbishop Tutu also rebuked religious conservatives who said homosexuality was a choice.

"It is a perversion if you say to me that a person chooses to be homosexual.

"You must be crazy to choose a way of life that exposes you to a kind of hatred.

"It's like saying you choose to be black in a race-infected society." 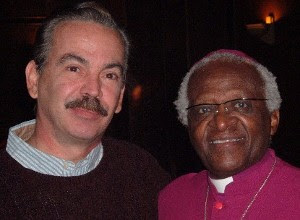 Encouraging words from a great man.

He doesn't just talk about being inclusive, by the way. For instance, consider that he allowed himself to be included in a photo with an eccentric and sometimes heretical rabble rouser.