I usually don't do much to commemorate Veteran's Day, but tonite, I got a phone call from my son, who is one of the chefs at a local restaurant.

So, I rummaged around, and came across this ancient thing: 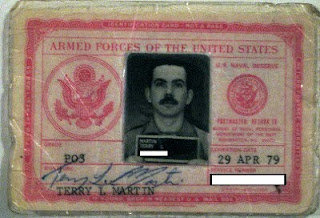 It's my Naval Reserve ID, issued in 1977. I haven't looked at it for a couple of decades now. The edges are a bit torn up, as I used it to open the door of our apartment when I forgot my keys, which happened regularly.

I enlisted in 1973 for a six year hitch; four years active duty, and two years inactive reserves. I served in Helicopter Combat Support Squadron Six out of Norfolk, VA. I was assigned to the Executive Transport Division. We had five H-3 Sea Kings we used to shuttle the brass between Norfolk and the Pentagon. 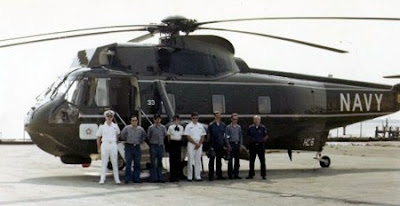 The strange thing about my enlistment was that even though I strongly protested the war in Vietnam while in my teens, when I became of age, I enlisted anyway. The Paris Peace Accord, which started the process of bringing that war to an end, was signed in January, 1973. I enlisted in April, 1973. I received all the benefits of being a Vietnam era veteran, even though I spent all four years in Norfolk.

Stranger still is that my father also enlisted when he became old enough during WWII. That conflict ended shortly after he commenced his first cruise.

And yet even stranger is the fact that my grandfather also enlisted right after High School during WWI. Those hostilities ended before his company was issued rifles.

So, in my family, we have three generations that enlisted during wartime, only to have the war end within months of taking the oath. Imagine that.

None of my friends were killed in Vietnam. We were all too young to be canon fodder for that one. But I did serve as a chaplain at a VA hospital in Wisconsin for a season. On the psych ward, I heard many blood curdling tales of what happened over there. I cannot even fully imagine what some of them experienced. But I know it sounded much like a hell that surpasses anything even Dante could have ever dreamed up.

I must admit that when it comes to serving in the military, I am somewhat conflicted. I am a firm advocate for non-violent resistance, and believe that when violence is used against violence, the result is almost always more violence. However, I'm not a pacifist.

It seems to me that if we see an act of violence being committed against an innocent victim, we have the moral obligation to stop that violence, by whatever means necessary. If we do not, we share some responsibility for that act of violence.

I believe that the young people who volunteer to serve our country are driven by a sense of duty and honor. Those two motivations do not always easily fit into our carefully dissected categories of right and wrong. For this reason, regardless of our moral opinions about war, I believe it is just and right to honor those who serve in our armed forces on this day.

Almighty God, we commend to your gracious care and keeping all the men and women of our armed forces at home and abroad. Defend them day by day with your heavenly grace; strengthen them in their trials and temptations; give them courage to face the perils which beset them; and grant them a sense of your abiding presence wherever they may be; through Jesus Christ our Lord. Amen