"The Family" Connection in Uganda

Jeff Sharlet is the contributing editor for Harper's and Rolling Stone, and editor of The Revealer, which has been a link on the sidebar of Jake's since we opened our doors. He was also one of the founding editors of Killing the Buddha, which is where I first noted his work.

In 2003, Jeff wrote an article for Harper's, Jesus Plus Nothing, in which he introduced us to "The Family," a secretive fundamentalist group of politicians living communally just outside Washington D.C. He has now expanded that article into a book; The Family: The Secret Fundamentalism at the Heart of American Power. 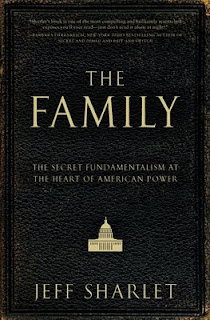 To get an idea of how alarming The Family is, consider this description from the bookjacket:

They are the Family—fundamentalism’s avant-garde, waging spiritual war in the halls of American power and around the globe. They consider themselves the new chosen, congressmen, generals, and foreign dictators who meet in confidential cells, to pray and plan for a “leadership led by God,” to be won not by force but through “quiet diplomacy.” Their base is a leafy estate overlooking the Potomac in Arlington, Virginia, and Jeff Sharlet is the only journalist to have written from inside its walls.

The Family is about the other half of American fundamentalist power—not its angry masses, but its sophisticated elites. Sharlet follows the story back to Abraham Vereide, an immigrant preacher who in 1935 organized a small group of businessmen sympathetic to European fascism, fusing the Far Right with his own polite but authoritarian faith. From that core, Vereide built an international network of fundamentalists who spoke the language of establishment power, a “family” that thrives to this day. In public, they host prayer breakfasts; in private they preach a gospel of “biblical capitalism,” military might, and American empire. Citing Hitler, Lenin, and Mao, the Family's leader declares, "We work with power where we can, build new power where we can't."

Yesterday, as I was driving back for New York, I happened to catch an interview with Jeff by NPR's Terry Gross. What was new information for me was the direct connection Jeff made between "The Family" and the Ugandan "Death to All Gays" Bill.

You can listen to the complete interview here. What follows is from the transcript of the section of the interview related to Uganda:

GROSS: Let's talk about The Family's connection to Uganda, where there's, really, a draconian anti-gay bill that has been introduced into parliament. Uganda already punishes the practice of homosexuality with life in prison. What would the new legislation do?

Mr. SHARLET: Well, the new legislation adds to this something called aggravated homosexuality. And this can include, for instance, if a gay man has sex with another man who is disabled, that's aggravated homosexuality, and that man can be - I suppose both, actually, could be put to death for this. The use of any drugs or any intoxicants in seeking gay sex - in other words, you go to a bar and you buy a guy a drink, you're subject to the death penalty if you go home and sleep together after that. What it also does is it extends this outward, so that if you know a gay person and you don't report it, that could mean - you don't report your son or daughter, you can go to prison.

And it goes further, to say that any kind of promotion of these ideas of homosexuality, including by foreigners, can result in prison terms. Talking about same sex-marriage positively can lead you to imprisonment for life. And it's really kind of a perfect case study and the export of a lot of American largely evangelical ideas about homosexuality exported to Uganda, which then takes them to their logical end.

GROSS: This legislation has just been proposed. It hasn't been signed into law. So it's not in effect and it might never be in effect. But it's on the table. It's before parliament. So is there a direct connection between The Family and this proposed Anti-Homosexual Legislation in Uganda?

Mr. SHARLET: Well, the legislator that introduces the bill, a guy named David Bahati, is a member of The Family. He appears to be a core member of The Family. He works, he organizes their Uganda National Prayer Breakfast and oversees a African sort of student leadership program designed to create future leaders for Africa, into which The Family has poured millions of dollars working through a very convoluted chain of linkages passing the money over to Uganda.

GROSS: So you're reporting the story for the first time today, and you found this story - this direct connection between The Family and the proposed legislation by following the money?

Mr. SHARLET: Yes, it's - I always say that the family is secretive, but not secret. You can go and look at 990s, tax forms and follow the money through these organizations that The Family describe as invisible. But you go and you look. You follow that money. You look at their archives. You do interviews where you can. It's not so invisible anymore. So that's how working with some research colleagues we discovered that David Bahati, the man behind this legislation, is really deeply, deeply involved in The Family's work in Uganda, that the ethics minister of Uganda, Museveni's kind of right hand man, a guy named Nsaba Buturo, is also helping to organize The Family's National Prayer Breakfast. And here's a guy who has been the main force for this Anti-Homosexuality Act in Uganda's executive office and has been very vocal about what he's doing, and in a rather extreme and hateful way. But these guys are not so much under the influence of The Family. They are, in Uganda, The Family.

GROSS: So how did you find out that Bahati is directly connected to The Family? You've described him as a core member of The Family. And this is the person who introduced the anti-gay legislation in Uganda that calls for the death penalty for some gay people.

Mr. SHARLET: Looking at the, The Family's 990s, where they're moving their money to - into this African leadership academy called Cornerstone, which runs two programs: Youth Corps, which has described its in the past as an international quote, "invisible family binding together world leaders," and also, an alumni organization designed to place Cornerstone grads - graduates of this sort of very elite educational program and politics and NGO's through something called the African Youth Leadership Forum, which is run by -according to Ugandan media - which is run by David Bahati, this same legislator who introduced the Anti-Homosexuality Act.

GROSS: Now what about the president of Uganda, President Museveni? Does he have any connections to The Family?

Mr. SHARLET: Well, first, I want to say it's important that you said it, yeah, it hasn't gone into law. It hasn't gone in to effect yet. So there is time to push back on this. But it's very likely to go into law. It has support of some of the most powerful men in Uganda, including the dictator of Uganda, a guy named Museveni, whom The Family identified back in 1986 as a key man for Africa.

They wanted to steer him away from neutrality or leftist sympathies and bring him into conservative American alliances, and they were able to do so. They've since promoted Uganda as this bright spot - as I say, as this bright spot for African democracy, despite the fact that under their tutelage, Museveni has slowly shifted away from any even veneer of democracy: imprisoning journalists, tampering with elections, supporting - strongly supporting this Anti-Homosexuality Act of 2009.

He's come out just this - just last week and said that this bill is necessary because Europeans are recruiting homosexuals in Uganda, that Europeans are coming in and trying to make Ugandans gay. And he's been rewarded for this because this is sort of where these sort of social issues and foreign affairs issues and free market fundamentalist issues all come together.

GROSS: How did The Family create its relationship with Museveni?

Mr. SHARLET: In 1986, a former Ford official name Bob Hunter went over on trips at the behest of the U.S. government, but also on behalf of The Family, to which - for which both of which he filed reports that are now in The Family's archives. And his goal was to reach out to Museveni and make sure that he came into the American sphere of influence, that Uganda, in effect, becomes our proxy in the region and that relationship only deepened.

GROSS: What's the relationship of Museveni and The Family now?

Mr. SHARLET: It's a very close relationship. He is the key man. Now.

GROSS: So what does that mean? What influence does The Family have on him?

And that may be true. He's certainly traveled there extensively. He says he likes to accuse the State Department of ignoring Africa so he becomes our point man with guys like Museveni and Uganda, this nation he says he's adopted. As we give foreign aid to Uganda, these are the people who are in a position to steer that money. And as Museveni comes over, and as he does and spends time at The Family's headquarters in Arlington, Virginia, a place called The Cedars, and sits down for counsel with Doug Coe, that's where those relationships occur.

It's never going to be the hard sell, where they're going to, you know, twist Museveni's arm behind his back and say do this. As The Family themselves describes it, you create a prayer cell, or what they call - and this again, this is their language from their documents - an invisible believing group of God-led politicians who get together and talk with one another about what God wants them to do in their leadership capacity. And that's the nature of their relationship with Museveni...

You can't make this stuff up.

If you haven't already, use the list provided in the previous post to contact those involved in pushing this ugly piece of legislation. And pick up a copy of Jeff's book.