If you haven't seen it yet, you simply must go read the report Globalizing the Culture Wars: U.S. Conservatives, African Churches and Homophobia. Here is part of the Public Research Associates' press release about it:

Sexual minorities in Africa have become collateral damage to our domestic conflicts and culture wars as U.S. conservative evangelicals and those opposing gay pastors and bishops within mainline Protestant denominations woo Africans in their American fight, a groundbreaking investigation by Political Research Associates (PRA) discovered...

There's a few things in this report that might by of interest to those who have been following the attempted Anglican coup.

For instance, remember when some of the Anglican Provinces announced that they would no longer accept funding from TEC? At the time we assumed that they had received promises of funding from other sources. Apparently, that was indeed the case. But, the way those funds are distributed is rather unusual:

A retired bishop in Uganda explained, "Americans send money to the archbishop's office, who later distributes [it] to dioceses." The Rev. Aaron Mwesigye, the provincial secretary in the Ugandan Archbishop Henry Orombi's office, confirmed this, saying that U.S. conservatives had been "contributing towards the renumeration and salaries of provincial staff since 1998." He added that "American conservatives provide money to Africans not as donors but as development partners in mission."

The report goes on to tell us that Alison Barfoot (now working for Orombi, but most well known as the person who championed the use of "offshore bishops" in the secret memos uncovered in 2003; see "The Attempted Coup" above) handles all the U.S. funding to Uganda. In the U.S., John Guernsey handles all American donations. In other words, no African accountants have access to the records of funds coming from the U.S.

As one example of how this "secret funding" works, remember GAFCON? You might recall that most Ugandan bishops chose to attend GAFCON over Lambeth. All kinds of reasons were given for this choice; refusal to sit with the Western apostates, solidarity with their brother bishops not invited to Lambeth, etc. Well, as it turns out, their expenses to travel to GAFCON were paid by "unnamed friends" of Abp. Orombi. Imagine that.

Another example is this strange bit of information, which has been most concisely summed up by Jim Naughton, who was a member of the advisory panel for this report:

...Among its interesting findings: that an organization run by Diane Stanton, wife of the Rt. Rev. James Stanton, Bishop of Dallas, is among the primary funders of Uganda Christian University, which is led by the Rev. Stephen Noll, who advocates the expulsion of the Episcopal Church from the Anglican Communion, and owned by the Church of Uganda, which has claimed ownership of Episcopal parishes in the United States...

What is most bizarre about all these secret funds, often distributed directly to the Primates of the various provinces, it appears, is that the accusation used to get these African provinces to refuse any funds from TEC was that we were trying to "buy their support." Never mind that all funds that went through TEC budget, or funds contributed through a diocese or other organization affiliated with TEC, made public reports available regarding the distribution of those funds, and put in place responsible accountability standards, to avoid the possibility of corruption. Instead, we have secret funds from the extreme conservatives in the U.S. being placed in the hands of individuals in Africa, with no apparent system of checks and balances regarding how those funds were spent. Who is "buying support" here? 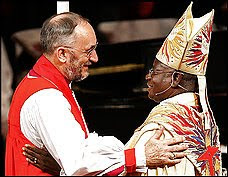 This point is not lost on some of the Anglicans in Kenya, Uganda and Nigeria. Here's more from the report regarding some of the "irregular" consecrations happening in Africa:

...Dissident U.S. Episcopalian leaders Bill Atwood, John Guernsey and Martyn Minns were consecrated as bishops under the leadership of African archbishops without proper consultation with their respective synods. A senior clergy member complained, "I don't know how they were ordained and why they were ordained. The matter was not discussed at the provincial or even at the diocesan level." One respected professor said, "By consecrating those bishops, the Anglican Church of Kenya violated its own constitution." Another argued, "If it was about rescue of American clergy, they should have asked for an African priest to be consecrated and sent to America," and speculated that the reason the African bishops ordained the Americans had to do with the money the prelates received from U.S. conservatives. In other words, he accused the U.S. conservatives of having bought their bishoprics from African prelates...

The report also highlights other conservative U.S. groups that are using funds and the wedge issue of gay rights to court the African churches. Prominent among them, of course, is the Institute on Religion and Democracy. In my book, the IRD is ranked right alongside Fred Phelps. Actually, because they hide behind flowery rhetroic and sweet smiles as they commit their most unChristian acts, I think they should be put lower than Phelps. At least Fred doesn't use subterfuge when he spews his hate.

The main point that the report makes clear is that it is not same sex attraction that is foreign to Africa. What has been imported in by the West is homophobia.

It also offers us a foretaste of future "wedge issues." Islamophobia will no doubt be next in line. We can see the foundations of that struggle already being built by the extreme conservatives in the U.S.

Read the report. See what jumps out at you. Then, let's talk about it.