The GAFCON Gaffes Roll On

This news story offers yet another version of why Abp. Akinola was not allowed into Jordan:

Nigerian Archbishop Peter Akinola, whose campaign has raised the spectre of schism in the 77-million strong Communion, was not allowed into Jordan from Israel on Wednesday to attend a pre-summit meeting of about 130 conservatives in Amman...

...Fjeldstad said Akinola was not denied entry into Jordan but gave up after several hours' delay at the border.

"He was kept in bureaucratic limbo," he said. "They claimed that, as a diplomatic passport holder, he had to give advance warning that he was coming. He decided to go back to Jerusalem."

Planned for four days, the Amman meeting "wound up early" when GAFCON leaders learned "that previously granted permission for the Jordan consultation was deemed insufficient", Fjeldstad said in a statement late on Wednesday announcing the move...

So it was not a "clearance" or a particular stamp or anything like that which was missing. It was an "advance notice." And he was not refused entrance to Jordan, he was simply detained for so long that he finally gave up and went back to Jerusalem.

Sorry, but I don't buy that version any more than I did the first version. 200 Bishops and their entourage are entering Jordan, and only one is held up at the border. And that one just so happens to be implicated in various acts of violence against Muslims in Nigeria.

As I mentioned yesterday, 90% of all Jordanians adhere to Sunni Islam. Their Constitution stipulates that the king and his successors must be Muslims and sons of Muslim parents. It certainly seems plausible to me that Abp. Akinola's actions against Muslims in Nigeria was probably the real reason behind his being detained at the Jordanian border.

Moving on, The Lead notes that the new book being unveiled at GAFCON includes an essay supposedly written by Peter Akinola, but was actually ghost-written by Martyn Minns. As I said at the time that Minns was revealed as the author of Akinola's words;

...May we remember this incident the next time Abp. Akinola's loud voice claims to be speaking for the majority of Anglicans in Africa. Most likely, the voice we will be hearing is not coming from another continent across the ocean, but from an office in Virginia...

How fitting that this ghost-written essay is now memorialized in GAFCON's little book. It is a good reminder of the unethical lengths this group will go to save themselves from gay cooties.

Speaking of gay cooties, Thinking Anglicans points us to the most ironic coincidence: 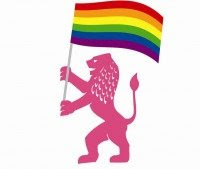 In June the gay, lesbian, transgender and bisexual community and our supporters will again struggle for our freedom of expression and civil rights in Jerusalem. The violence and Intimidation surrounding Pride 2005 and 2006 only serves as proof that we must assure that our rights as citizens of Jerusalem are defended.

June will put Jerusalem, Israel and our leaders to the true test of democracy and civil rights. Though we expect the struggle to be tough, we will not let the threats of violence silence us or challenge Israeli democracy. Our struggle to march this summer will require us to unite as a community and pool our resources and personal strength- for this historic battle on the forefront of human rights in Jerusalem.

Well, imagine that. The Bishops would look fabulous in their long magenta cassocks and glittering pectoral crosses. Will they have the courage to join the parade? Oh yea...gay cooties. I momentarily forgot that little matter. I guess they'll just have to stay inside on the 26th. Just as well. I doubt they'll find many takers for their new book among the parading crowd gathered outside their "pilgrimage" site.

Poor GAFCONites. Parading gays to the left of them and Muslims to the right. Seems like they just can't find a venue where pure people like themselves can gather in peace to launch a little schism.

However, according to an editorial in the Telegraph, their hopes for a schism may be getting dimmer as each day passes by:

...On paper, therefore, the moment of schism in worldwide Anglicanism has arrived. Many of Gafcon’s members will boycott Lambeth, and the Archbishop of Canterbury will therefore preside over a ruptured communion. But, before Dr Rowan Williams runs up the white flag, he should take a closer look at the reality of Gafcon, as opposed to its self-important pronouncements. The truth is that the conference has so far been a shambles. Its leader, the belligerent Archbishop Peter Akinola of Nigeria, has been denied entry to Jordan. Other conservative church leaders are missing because they have chosen not to attend. Significant absentees at Gafcon include the Rt Rev John Chew, Primate of South-East Asia, and Dr Mouneer Anis, Presiding Bishop of Jerusalem and the Middle East and treasurer of the “Global South” group of conservative provinces. And even those leaders who are attending the conference make up a volatile compound. Gafcon, in other words, is far from the united force it claims to be, and it does not fully represent Anglicanism in the developing world...

...Gafcon is dominated by the single issue of homosexuality; its relative failure should remind us that ordinary Anglicans – and especially members of the Church of England – are not obsessed with sexual mores or gay marriage. The challenge of Lambeth is to revive Christianity in a secular age. Dr Williams is well aware of that fact, and we wish him well...

I can imagine that Abp. Akinola, along with the rest of the ringleaders of this "alternative Lambeth" are spittin' bullets by now. We can expect to hear some rather unscripted outbursts in the days to come. So, stay tuned. The show in Jerusalem is just geting started.