One final look at today's wonderful celebrations in San Joaquin.

Our Integrity display at the convention drew quite a few people. We ran through about 80 information packets. Some had heard of Integrity, many had not. We listened to many stories; some of loss, alienation and abuse, and others of hope, resilience and a desire to organize. There were lots of questions about the “cause” of sexual orientation (Is it genetic or what?), how to talk to people about sexual orientation, and how to organize displays for local Pride events. To a person, everyone was respectful, if not right out supportive. It was also clear that most of the human sexuality discussions the church has engaged in over the past 2 decades skipped right over this valley.

It was a great experience to be at a church event with so much positive energy. There’s rather a lot of difficult business to get through in the coming months. Please pray for continued positive energy and well-being for us as we move forward…

I have just been to the most joyful diocesan convention I have ever experienced. I am still floating, so I'll make this short (otherwise I'll go all "flowery"). If you want hope, joy, love and hospitality, come to the Episcopal Diocese of San Joaquin. The liturgies over these last 24 hours have been punctuated by many "Alleluia!'s". If you want to hear them shouted with pure confidence, come to the Episcoapal Diocese of San Joaquin.

Well, I won't even try to give a blow-by-blow report from today. Others (including the official news reporters) can do it much better. Instead, I will offer a few "snapshots" of this glorious day...

... Singing on the bus on the way from Fresno to Lodi a bucket of praise and worthy classics, and feeling, as the song says, that "Surely the Presence of the Lord is in this place"

... Seeing a table full of vestments, altar linens, etc. etc., with unpacked boxes below the table, all of which had been donated by people from around the country to give, for free, to our emerging congregations.

... An "Integrity" table. In the Diocese of San Joaquin!

... Seeing the tables set up with information from programs that had never had an audience in the Diocese of San Joaquin in the past. Taking away a stack of brochures for Education for Ministry (EFM) so that I can get this program up and running at Holy Family church in Fresno.

... Hearing the unanimous "yeas" and not a single "nay" as the convention voted to undue the problems of the Schofield era and move on with a new bishop.

... Seeing Fr. Rob Eaton of the old standing committee present his objection to the proceedings. Although I didn't agree with him at all, he was respectful and earnest. And he was there.

... Being present at the enthronement Eucharist. Nobody does this kind of thing better than the Episcopal Church. It was a full stop affair, with all the smells, bells and midget races (i.e., incense, bells, and acolytes running around).

... Hearing the congregation positively shout out their responses at the Eucharist. You've never heard such loud "alleluias" or "we will with God's helps".

... The humble modesty of Bishop Lamb.

... The reception line at the end of the Eucharist with +Jefferts Schori signing autographs like a rock star.

... The wonderful sermons by +Lamb and +Jefferts Schori that left all of us charged up and ready to take on the heavy tasks ahead of us.

All in all, a glorious day. ALLELUIA!

Oh my gosh, it was a wonderful day. I am so impressed with our Presiding Bishop Kathryn Jefferts Schori. She has such a gracious and calm demeanor, and yet there is a significant, strong spiritual strength about her. (I will not say she is a godly woman, although she is as close to such as I have ever seen. However, I have a problem with the idea of godly priests and bishops, as I belive they are all just people with the same baptismal covenant we have, only their charge is greater, to look after the sheep, and so many seem to forget that charge.) May I say that her manner of dress for the Eucharistic service was elegant, (and I say that because of past comments I have heard.) I wish I had a picture for you. Her spouse led a session at noon for spouses of clergy. I wasn't part of that group, but they looked very engrossed in their discussion when I was returning from lunch. The presiding bishop's husband is a friendly, gracious man, who introduced himself to me and to others in the line for lunch.

There are so many plans for the future, and truly, there are great hopes to reach out to others in a spirit of reconciliation. Whatever happens, I believe that the REAL EPISCOPAL CHURCH has returned to the Diocese of San Joaquin, and I love it.

Oh, and on top of everything else, I met Fred Scwartz and Scott Hankins!! What a day it has been!

To all my Jake's place friends and family I say Alleluia! The Lord is Risen Indeed! It is indeed interesting to meet folks from this great place on a face to face basis. We had visitors from Connecticut, Hawaii, New Mexico (I'll let you guess who that is), Nevada, Washington, ALASKA! for heaven sakes, and from Arizona as well as Diocese of California, No. California, El Camino Real, Los Angeles and San Diego.

Bishop Rivera's daughter (not the Bishop, the other daughter) spoke to us at lunch and passed on what she thought her father might want us to know o nthis glorious day! 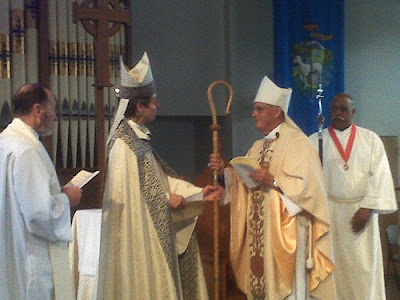 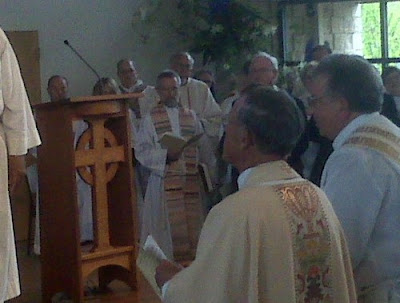 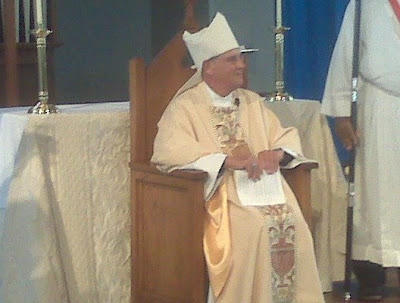 (no wi-fi at the convention, so unlike Fresno Mark, I had to wait till I got home)

Just some impressions--I'll report at length later, with pix, on my blog (tired out from the long drive home).

First off, what a joyous crowd! The first convention in three years where the only tears I've shed as a delegate have been those of joy.

Getting to meet Beryl and Leslie was an honor. They are just as gracious and charming in person as they are in their postings online.

Seeing the new missions and the new priests (many of them women!!) welcomed in! Women priests?? San Joaquin???

As Grace Episcopal, Bakersfield was announced, they all brought out their t-shirts--one parishioner ran up and presented one to the PB.

Shaking Father Eaton's hand and telling him I was glad he was there. Wishing that Father Snell had come.

Getting my picture taken with the PB like a star-struck fan.

The most glorious Eucharist, with trumpet and organ music.

Hearing the first sermon of our new bishop and the enthusiastic responses at his seating. (He said that he had seated KJS, and now she was seating him! Musical chairs???)

Knowing that all of you were rejoicing with us! Thank you and good night!

And yet another story from Episcopal Life:

A jubilant celebration of Holy Eucharist concluded the March 29 special convention in the Episcopal Diocese of San Joaquin and made official Bishop Jerry Lamb's role as provisional bishop.

"What you have been about and what I have been about these last months, weeks, days, even hours is not really about building a new diocesan structure," Lamb said during his sermon. "As I understand it, what we are about is the proclamation of the Good News that Jesus is the Christ and that we do this from within the base of our Episcopal and Anglican tradition because that's who we are: members of the Episcopal Church and members of the Anglican church."

Half of the offertory was assigned to Lamb's discretionary fund and the other half, Lamb told the congregation to loud and sustained applause, would be given to the Diocese of Louisiana, which continues to rebuild after hurricanes Katrina and Rita...

...Earlier, during his sermon, Lamb had told the congregation that the work in which they were engaged is "not about who your bishop is."

"It is about how you and I will rebuild this Episcopal diocese so that at its core it will proclaim and live the Gospel or Jesus Christ," he said. "The diocese must have its roots firmly in Christ Jesus and live out the baptismal promises we all have renewed in one way or another this past week"...

Now, I know there's still a lot of work to be done,but tonight I feel more at peace about the future of San Joaquin than I have in many years. It's almost as if I can feel the fresh breeze of God's Holy Spirit gently flowing through that valley from all the way over here in New Jersey! Thanks be to God!

Now we need to bring this day to a close. To keep from having someone disrupt the spirit of today's conversations, I'm going to moderate comments for awhile. Besides, don't you all have to get up early for church tomorrow? Go to bed!

The Lord Almighty grant us a peaceful night and a perfect
end. Amen.

In you, O LORD, have I taken refuge;
let me never be put to shame: *
deliver me in your righteousness.

Incline your ear to me; *
make haste to deliver me.

Be my strong rock, a castle to keep me safe,
for you are my crag and my stronghold; *
for the sake of your Name, lead me and guide me.

Take me out of the net that they have secretly set for me, *
for you are my tower of strength.

Into your hands I commend my spirit, *
for you have redeemed me,
O LORD, O God of truth.

Be present, O merciful God, and protect us through the hours
of this night, so that we who are wearied by the changes and
chances of this life may rest in your eternal changelessness;
through Jesus Christ our Lord. Amen.