The first summary of the day's events was offered by Fred:

Hi, it is now lunch and we are almost finished with business. It is/was hard to describe. Things went very well. Rob Eaton showed up with 2 parishioners/vestry and complained. We listened respectfully. +Lamb is now the provisional bishop for EDoSJ. C and C rolled back to 2003. New SC and DC elected. Eucharist and seating to happen around 2. More later.

Fred also sent this candid shot of the Bishops: 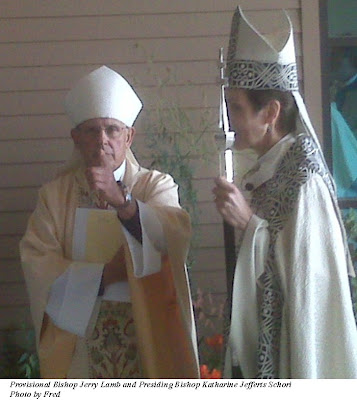 We then received this brief note from Fresno Mark:

All is well. All shall be well. It has been a wonderful day. The Eucharist and enthronement of Bishop Lamb is about to start. Keep you prayers ascending with us at this joyous time.

The members of the Episcopal Diocese of San Joaquin March 29 chose their provisional bishop and other officers, and passed organizing resolutions during a convention filled with cheers and applause, and rooted in the message of resurrection.

"I am awed by the opportunity" that the Diocese of San Joaquin has to transform itself, said Nancy Key, a member of the steering committee that worked towards the convening of the special convention, during a lunch break. The diocese has "a lot of momentum" that can now be channeled into concrete action, she added.

Presiding Bishop Katharine Jefferts Schori opened the convention at the Episcopal Church of St. John the Baptist in Lodi, California, with Morning Prayer.

The rest of the Episcopal Church "stand[s] with you in the firm and constant hope that this body will grow and flourish and bless the Central Valley of California in ways you have not yet dreamed of," the Presiding Bishop later told the convention.

When then-acting Convention Secretary the Rev. Deacon Susanne Ward called roll of the diocese's congregations, 18 of 47 responded, accounting for 43 lay delegates and 21 clergy. More than 400 people attended the convention.

Clergy delegates were asked to sign an oath of conformity to the Episcopal Church, similar to that which they were required to sign at their ordination. Lay delegates signed an oath the echoed the Baptismal Covenant. Nominees for diocesan offices also had to sign the oath.

The convention accepted without debate Jefferts Schori's recommendation of Jerry Lamb as provisional bishop of the diocese...

There were a few objections raised:

...The call to elect a new Standing Committee drew protest from the Rev. Robert Eaton, rector of St. John's Episcopal Parish in Tulare, California, and two lay delegates. Eaton, who said they wanted to protest "in as godly and Christian a manner as possible," told the convention that he had never resigned from the Standing Committee and thus should not have his seat taken away from him.

Tulare delegate George Sutton objected to what he called the "illegality" of the special convention, claiming that only the Standing Committee can call a special convention. Gillian Busch, the other lay delegate, said that the Tulare parish had not been included in the organization of the steering committee that worked toward the convention.

The Rev. Mark Hall, convention chair, replied that "this matter has been settled."

Jefferts Schori had told the participants earlier that the convention had been called because Bishop John-David Schofield had been deposed or removed from his diocesan seat after having abandoned the communion of the Episcopal Church, and because the Standing Committee removed because it took actions "which violated their ability to hold office in this church."

Congratulations to the members of the Episcopal Diocese of San Joaquin! Well done, good and faithful servants!

UPDATE: You can listen to the news conference that followed the Convention here.
Posted by Jake at 6:53 PM