...People just kept on passing the peace for about 5 minutes or so when Father Mark Hall called us back to order. He formally introduced Katharine Jefferts Schori, Bishop Lamb and their spouses, and Bonnie Anderson He made a special presentation of a gift basket of St. Anne’s beers to the PB (“PB Stout”) and to Bonnie Anderson (“Anti-Schism Ale”), quipping that “this church is just a front for a brewery.” He didn’t skip Bishop Lamb however, noting that he will soon get a “key to the sacristy where all the beer is stored.”

Then the Q and A started. The questions were all in the same vein for the most part: what might happen next, what should we do in divided parishes, how should we move forward… for clarification about the HOB vote on the deposition. The PB is a very eloquent speaker. She noted that the vast middle of the Anglican Communion is annoyed that so much time and effort is spend on issues of human sexuality when there are people dying of hunger and disease in our midst.

One person expressed our thanks to the PB, to Bonnie Anderson and to Bishop Lamp for their support. At one point we gave PB a standing ovation.
She later said, “It is you who deserve a standing ovation for your hard work.”

After the Q and A we milled around and talked. I enjoyed a glass of St. Anne’s Porter: a humble little beer, not overly complicated, but smooth and comfortable.

So the big questions whether any of the Standing Committee will show tomorrow. I’ll go out on a limb and say that I think Father Snell and Father Eaton will show up. And I hope they do. We will welcome them back in if they want to be welcomed back in.

In closing, it was an evening marked by optimism, hope, and love. A fitting beginning to the work that continues tomorrow, and a big step toward healing for this battered diocese. 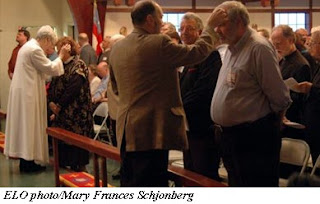 I have just returned to my home this evening after a wonderful reception, and then a beautiful Evening Prayer and Healing Service. The church was filled to capacity, and it seemed to me that everyone present went forward for anointing, and to move forward in a spirit of forgiveness and reconciliation. It was a moving and spiritual occasion. Afterwards, when Presiding Bishop Schori was introduced formally to the group, she received a standing ovation. Presiding Bishop Schori has such a calm and spiritual presence, and we all appreciate her willingness to come and be with us at this time. Bonnie Anderson was also present and participated in the Healing Service. It was a wonderful evening, and I can hardly wait for tomorrow...

Tonight's service was beautiful. Everyone there was beautiful. It was such a pleasure to meet at least one more face from here at Jake's. I will miss tomorrow, but going tonight was very important to me. Among other things, I feel a bit spiritually renewed. There is more to come this weekend and I pray peace continues to fill our hearts, minds and souls in the Episcopal Diocese of San Joaquin. Kudos for Father Glenn Kanestrom and others who made tonight's service such an amazing, God-led and Spirit-filled event. Thank you to PB Schori for being here. Appreciation and gratitude to those praying for us.

...Jefferts Schori, Anderson and Bishop Jerry Lamb -- whom the Presiding Bishop has recommended to become San Joaquin's provisional bishop -- spent 45 minutes after the service answered questions from the congregation.

Asked how members of the diocese can go about the work of reconciliation, Lamb said there will need to be many more opportunities such as the March 28 gathering "to see each other on a very real face-to-face basis." He also said that he suspects there are many people in the diocese who are "feeling very much on the edge" and need to know that there will be safe and supportive places for them in the reorganized diocese.

One questioner asked about criticism of the way Jefferts Schori articulates her belief in Jesus Christ as savior.

"Do you believe Jesus died for the whole world?" she asked the questioner in reply.

"So do I," said Jefferts Schori. "If I can say with you that Jesus died for the whole world, then I think the mechanism [of salvation] is up to God."

God wants to be in relationship with all human beings, she said. "I am not too worried about how God does that," she added.

In response to a question about the status of church property in the diocese, Jefferts Schori said that one of the first tasks of the diocese's new leadership will be "to recover the corporate sole" of the diocese. This process will involve removing control of the property from deposed San Joaquin Bishop John-David Schofield.

"We believe since John-David Schofield has been deposed, he has no right to claim the property of the diocese as the corporate sole," she said.

The Presiding Bishop said that the Constitution and Canons of the Episcopal Church say that parish and diocesan property is held in trust for the entire church. "We believe those properties are a legacy" given by generations of Episcopalians for the use of generations yet to come, she said.

"We don't have the fiduciary or moral responsibility to simply walk away," Jefferts Schori told the audience. "They're meant for mission and we'll do what we can to recover them."

Answering a question about reports of problems with the March 12 consent by the House of Bishops to her request for authority to depose or remove Schofield from his diocesan position, Jefferts Schori said that the vote was conducted in the same way that other such deposition requests have been done.

While the applicable canon (Canon IV.9.2) may have "varieties of interpretation," the Presiding Bishop said that her chancellor and the House's parliamentarian ruled that the canon called for approval by the majority of those bishops present at the meeting. She added that the canon does not allow for a poll by mail of all bishops eligible to vote, as some have suggested ought to have been done.

"We believe that we did the right thing," she said, adding that the consent came from "a clear majority of those present."

When asked whether the House of Bishops will strengthen itself to deal with bishops who mistreat their dioceses, Jefferts Schori, reminding the audience of the Episcopal Church's governance structure, said such discipline is "not technically the responsibility of the House of Bishops."

The House can challenge the conduct of a member, she said, but "the ability to impose sanctions is quite limited, and when a bishop does not participate in the House of Bishops, it's even more difficult."

Schofield has not regularly attended House of Bishops meetings in recent years.

Jefferts Schori said that the fact that the Episcopal Church is made up of "relatively autonomous dioceses in relationship with each other through General Convention" means that discipline in part "depends on people being able to call each other to account," as opposed to having one person able to impose penalties.

The Presiding Bishop predicted that the next meeting of General Convention in July 2009 would be asked to consider ways to change the canons to better deal with such disciplinary matters. Anderson reminded the audience that General Convention deputies, such as those due to be elected by the San Joaquin diocese on March 29, can propose resolutions calling for such changes.

"If you have ideas about canonical changes, you have the authority through your deputies to bring them to General Convention," Anderson said.

Jefferts Schori and Anderson told the audience that the lessons which Episcopalians in San Joaquin have learned can be of help to their counterparts in other conflicted dioceses.

"There's a tremendous amount of wisdom that can be passed along to lay people and clergy in those other disaffected dioceses," Anderson said.

"And we firmly hope they are watching," Jefferts Schori added.

Today, the Convention of the Episcopal Diocese of San Joaquin begins. Please continue to keep this Convention in your prayers.

Almighty and Everliving God, source of all wisdom and understanding, be present with those who take counsel in the Episcopal Diocese of San Joaquin for the renewal and mission of your Church. Teach them in all things to seek first your honor and glory. Guide them to perceive what is right, and grant them both the courage to pursue it and the grace to accomplish it; through Jesus Christ our Lord. Amen.