Have you had your fill of the Anglican soap opera yet? How about, for at least a little while, talking about something else? No doubt there will be new developments, so we will return to it. But we're two days from Ash Wednesday, and the somber tone that Lent will bring with it, so before I miss the chance, I wanted to mention something personal that I'm rather excited about.

As most of you know, my wife and I live in a quiet town in South Jersey. Why did we settle here? It is the town in which my wife grew up. We live on the same street on which she learned to ride a bike. Her parent's home is just down the block. If I can't live in California, which will always be home for me, I don't really care where we live. Having lived in New Mexico, Oregon, Wisconsin, Virginia, Tennessee and North Carolina, I must say that South Jersey is quite nice. Four seasons, with none too severe (and usually one nice snow per year), beautiful countryside, less than an hour from Atlantic City and Philadelphia and two hours from NYC. I've been here five years now, and it is beginning to feel like home. Not quite like California, but close. Most likely we'll be staying here for awhile.

We have a cute little house that is fine for two people. I think it used to be a lake cabin at one time, as some of the rooms are quite small. We estimate it is about 100 years old. The problem is, this little cottage will soon become a money pit. When we fully retire in the next 20 years or so, it will probably be falling apart.

The town has been around for awhile, so there is little construction going on in our neighborhood. Some families have lived in the same house for four generations. But, a few months ago, a builder cleaned up a large parcel of land two blocks from us that had been allowed become overgrown and neglected. I think at one time there was a school there. He made a new street, that dead-ended in a culdesac, and began developing 12 lots. The lot at the end of the cudlesac was available. We purchased it.

To keep costs down, we selected one of the models the builder offered, and then added various custom features, such as a fireplace, dark cherry hardwood floors, a walk-in closet, and an office upstairs for each of us.

The floor plan is fairly simple. The entry is open to the second floor, giving it a 17 foot ceiling. To the left is the formal living room. To the right is the formal dining room. As you walk further in, at the back of the house is the kitchen and den, which is one long room, with a bay window for a breakfast nook. The fireplace is along one wall of the den. Upstairs consists of a large master suite, two offices, and one guest room.

We turned the garage, so those big ugly doors can't be seen from the front. The yard is big enough to run the dog, have a garden and a patio, and still let some of it stay natural.

They've finished framing and have the siding up, so it actually looks like a house now. They'll start drywalling soon. Here's what it looks like at this point: 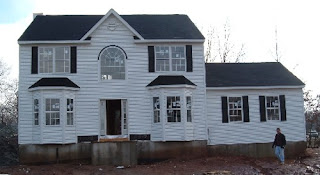 And here is what will be the den and fireplace: 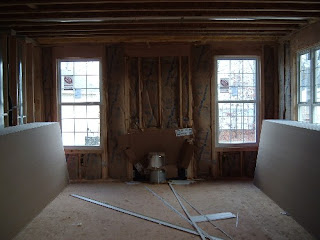 We hope to move in by the end of this month. As someone who started out as a homeless teen, and has moved around like a vagabond most of my life, this is a quite significant development. Now, if we could just skip the moving and unpacking bit!