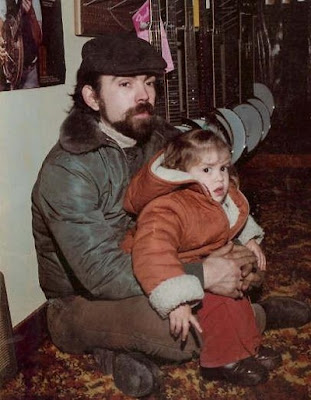 While packing for our move, I came across the above picture. It is of my youngest daughter and me from about 25 years ago. I was around 28 and working on a loading dock during the day while going to school at night. She was 4 and had not yet entered school. The occasion was a concert at the music store in which her mom gave guitar lessons. You can see a row of banjos on the wall behind us.

My daughter was a delightful little girl, with occasional displays of stubborness and independence that went beyond that shown by her siblings. This was not a problem until the day one of her 7th grade teachers wrongly accused her of stealing a pair of scissors. The teacher made this accusation, and then turned to walk away. My daughter climbed onto her desk and screamed, "I did not take your ******* scissors!"

That was the beginning of some difficult years. Being a bit stubborn myself, my daughter and I had numerous heated confrontations. By the time she turned 18 and moved into her own apartment, we rarely spoke to one another. Years of resentments had made any type of normal relationship a distant hope.

About a year after she set out on her own, she ended up in a very difficult situation. I knew that I was in a position to help her. I also knew that she would not ask for my help. Part of me thought that maybe it was about time she learned some tough life lessons. But another part of me remembered the little girl you see in this picture, and just wanted to love her.

Love won out. I drove over to her apartment, and we had a long talk. After some shouting, and even more tears, she accepted my offer of help, which included moving back in with us for awhile.

The next few months were difficult, but we tried to set our differences aside and just love each other. And it worked. We got through the crisis together. And our relationship was healed. It has been over eight years since we have exchanged any heated words.

My daughter is now married and has two lovely children of her own. She has never needed me to bail her out of another tough spot since that one time. She called me the other day to share her excitement about the new house they are moving into near Seattle. She wanted me to share her joy. And she wanted me to know that I was loved.

I hope my daughter learned a few positive things from me as she was growing up. And I hope she realizes the important life lesson that she taught me:

Sometimes, in relationships, being right or wrong isn't terribly important. Neither is our level of anger or stubborness. In the end, if the relationship is one we value, we have to let love trump all.