The Peoria Journal Star recently ran an article under this headline; "Diocese of Quincy gears up for fight with TEC." Here's part of it:

The Episcopal Church has a question for the west-central Illinois Diocese of Quincy:

Are you ready to rummmmmbbbbblllllllllle?

The denomination's executive council declared last week that certain parts of the constitutions of four dioceses, including Quincy, are "null and void," particularly sections which TEC power-structure higher-ups feel might be used to leave the church...

We have previously discussed this action by Executive Council here.

The Rev. Jan Nunley, quoted in the PJS article, has offered us a response. As Jan has done an excellent job of clarifying some of the current confusion, I'm reprinting her entire response here:

...there's a little misunderstanding here. The issue isn't "leaving the church": anyone can do that. Certainly Episcopalians regret anyone making such a decision, especially in anger; we'll miss you, but it's a free church in a free country.

The issue in question here is not "leaving the church," but leaving the church while attempting to take the property lawfully held by them in trust only for the mission and ministry of The Episcopal Church and no other.

One is a decision made in conscience. The other is...well, whatever you want to call walking off with something that isn't yours without the consent of the owners. Which is, last time we checked, an action not exactly fraught with "Christian love and charity."

Ah, but they paid for that property! someone opines, with their tithes and offerings, and the deed is in their names. (This reminds us somewhat of the cynical logic exhibited by the old preacher who used to take the Sunday offering basket out back of the church, toss the contents up in the air, and declare that God was free to take whatever didn't fall to the ground.)

That's true, as far as it goes. But try that with the National Parks System, for example, and see how far you get taking your share of Yellowstone. Why? Because the National Parks are held in trust by the Federal Government for all Americans. And when you pay your fee, you get to use the Park--subject to certain restrictions designed to protect it for future users. And you don't get to take pieces of it home for your kids. Because your neighbor has a right to expect that it will be there next week when she goes on vacation with her kids.

Similarly, when you declare you are no longer affiliated with a group, you don't get to take any office you might have held with you out the door. The moment you say, "That's it! I quit!", you are no longer the Grand Poobah of the Knights Who Say Nee, and the royal regalia stays behind, even if next week you incorporate as The Knights Who Say Nah. You have to get your own regalia, even if your grandmother made the cape.

There's no problem, of course, as long as you abide by these agreed-upon rules of civil society, or if you don't like them, lawfully try to get them changed. But if you fail to get others to agree with you and then try to create "facts on the ground" by changing the locks on the clubhouse...you really shouldn't be surprised if the rest of the members take exception to your actions.

This all seems very self-evident to your editor, but apparently it needed some clarification. 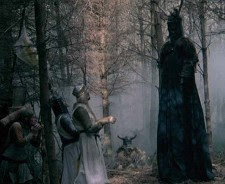 This is how I've always viewed the situation. Since we are a hierarchical church, I hold the bishops and archbishops who claim these churches accountable.

For those not familiar with Monty Python's "The Knights Who Say Nee," you can read the script here.

If this was only about a good shrubbery, one that looks nice, but not too expensive, there might be room for negotiation.