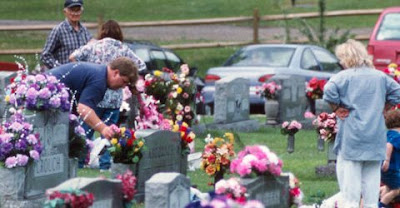 Following the Civil War, many communities set aside a day to remember those who had died. The graves of the fallen were adorned with flowers and flags, and special services of remembrance were held. Eventually, the Union and Confederate observances were combined to become Decoration Day. The name "Memorial Day" was first used in 1882, but was not designated as an official Federal holiday until 1967.

In the last couple of years, we haven't spoken much about national matters here at Jake's place. One reason for this is that I believe nationalism is rarely appropriate within the life of the Church. Beyond that, many of us often find good reasons to be quite critical of our government, especially in regards to the current sad chapter unfolding in Iraq. On this day, I ask that we set those matters aside.

As far as personal disclosure, I am a veteran, being honorably discharged in 1977. I enlisted at 19, at the very end of the Vietnam era, and was stationed state-side for my entire enlistment. In a strange way, I was carrying on a family tradition. My father passed up a college scholarship when he was 18 to enlist in the Navy at the end of WWII. The war ended while he was still at sea during his first cruise. My grandfather enlisted in the Army at the end of WWI. He was discharged before his company was issued rifles.

I think that sometimes it is difficult for those who have never served in the military to understand what would cause young men and women to make such a decision. I want to suggest that there are two words that come close to explaining such motivation; honor and duty. For a young person to feel it is time for them to step up and "do their duty" for the sake of their nation is a honorable decision. Personally, I feel every citizen should be required to give two years to civil service; if not as a part of a military unit, then in some other capacity.

Once these young people have taken an oath to defend our nation, it is a matter of keeping your word; of honoring the promises, the vows, you have taken. Once a part of the organization, it becomes a matter of living into those promises. Others are counting on you. If you decide to break your promises, it will impact those who are part of your team. In some situations, it is not only your own life that could be lost by refusing to do your duty; you may be putting other lives at risk as well.

Matters involving honor and duty often transcend other ethical debates regarding right and wrong. So, please, use care before judging our young men and women in uniform. Respect that, in their minds, they are doing their duty. That is a noble endeavor.

Since I'm not sure when, if ever, we will engage this particular topic again, I want to say just a little bit more. I consider myself blessed to be a citizen of the United States of America. I don't always agree with our leaders, and often am saddened by societal trends, but such disagreements and disappointments are the result of a deep love for our land. I am thankful that I have the freedom to be so critical. I still believe that we have the potential to continue to be a great nation.

Today, we are invited to remember those who have fallen. As an example of such remembrances, I invite you to visit A Guy in the Pew.

A national moment of remembrance takes place at 3 p.m. Eastern time today. I suggest that we all pause our activities and take a moment to remember those who have died serving their country. And then, you may want to offer the following prayers.

Almighty God, giver of all good things:
We thank you for the natural majesty and beauty of this land.
They restore us, though we often destroy them.
Heal us.

We thank you for the great resources of this nation. They
make us rich, though we often exploit them.
Forgive us.

We thank you for the men and women who have made this
country strong. They are models for us, though we often fall
short of them.
Inspire us.

We thank you for the torch of liberty which has been lit in
this land. It has drawn people from every nation, though we
have often hidden from its light.
Enlighten us.

We thank you for the faith we have inherited in all its rich
variety. It sustains our life, though we have been faithless
again and again.
Renew us.

Help us, O Lord, to finish the good work here begun.
Strengthen our efforts to blot out ignorance and prejudice,
and to abolish poverty and crime. And hasten the day when
all our people, with many voices in one united chorus, will
glorify your holy Name. Amen.

O Judge of the nations, we remember before you with grateful
hearts the men and women of our country who in the day of
decision ventured much for the liberties we now enjoy. Grant
that we may not rest until all the people of this land share the
benefits of true freedom and gladly accept its disciplines. This
we ask in the Name of Jesus Christ our Lord. Amen.
(BCP, pp. 838-839)