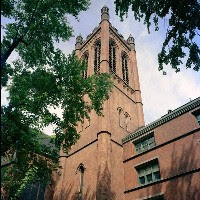 Next Monday night, I'll begin attending a class being offered by General Theological Seminary. It's a class that is directly related to a project that I've taken on for the Church.

Although I have no intention of engaging in another paper chase, I must admit that I'm quite excited about this new venture. It's been 17 years since I was in seminary. As I have some serious disagreements with policies held by Nashotah House, I've not participated in any of their alumni activities. Taking this class may be the beginning of a new relationship with a seminary which offers many of the qualities that I found attractive in the House, without all the extra baggage.

I'm looking forward to having access to a good theological library, being able to join the community on Mondays for chapel, and having a good reason for spending more time in New York.

Demi used to work in NY (in the Twin Towers), so she prefers to not visit very often. Consequently, I've only been up there a few times, even though we are only 2 hours away. Those few visits were enough for me to recognize that there's no place quite like New York anywhere in the world. Exploring such a new world will hopefully be an exciting adventure.

There's going to be a few adjustments to make. Everyone keeps telling me that I must take the train, or subway, or some kind of other strange conveyance. As a born and bred Californian, this is an uncomfortable notion. Abandon your car and ride in a vehicle with some stranger at the controls? Sounds pretty risky to me.

I have a good friend who is on staff at the the Episcopal Church Center. I've been invited to visit my friend and be introduced around to various other members of the staff. Since Mondays are my day off, I usually dress casually (jeans and t-shirt), and had planned to wear similar attire to the evening class at General. Now I'm wondering if maybe it might be wise to wear the uniform instead, at least for the visit to the Center, if for no other reason than to keep from being tossed out by security for panhandling.

So, I'll be in New York on Mondays for the next few months. I hope to designate a couple of hours before each class for exploring. Any suggestions as to what to see and where to go would be appreciated. If you are from that part of the world, shoot me an email, and maybe we can get together for a cup of coffee.