Review Committee Certifies That Bp. Duncan of Pittsburgh Has Abandoned the Episcopal Church 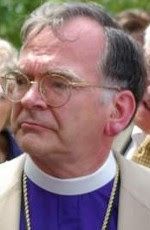 The Episcopal Church's Title IV Review Committee has certified that Episcopal Diocese of Pittsburgh Bishop Robert Duncan has abandoned the communion of the church.

Presiding Bishop Katharine Jefferts Schori informed Duncan on January 15 of the certification and sent him a copy.

Her letter told Duncan that she sought the canonically required permission from the House's three senior bishops with jurisdiction to inhibit him, based on the certification, from the performance of any episcopal, ministerial or canonical acts.

"On 11 January 2008 they informed me that such consents would not be given at this time by all three bishops," Jefferts Schori wrote.

"I would, however, welcome a statement by you within the next two months providing evidence that you once more consider yourself fully subject to the doctrine, discipline and worship of this Church," Jefferts Schori wrote in her letter to Duncan...

Most likely it was Bp. Wimberly of Texas who blinked. So, without the consent of all three senior bishops, he is not inhibited. But now it is only a matter of time (60 days) until he faces a vote before the House of Bishops as to if he is to be deposed or not. Inhibition was just a limited, temporary fix anyway. He needs to be permanently blocked from functioning as a Bishop in TEC.

The evidence considered by the Review Committee can be found here. It makes a very solid case that the actions of Bp. Duncan clearly reveal that he has indeed "abandoned the communion of this Church by renunciation of the Doctrine, Discipline or Worship of this Church." Here's just a few examples:

“Bishop Robert Duncan’s Pre-Convention Report” (September 11, 2007)
In this letter to the Diocese leading up to the November 2-3, 2007 Diocesan Convention, Bishop Duncan states that the “time has come to begin the process of realignment within the Anglican Communion.” Thus, constitutional amendments to be considered at the Convention “would begin the process to exercise our right to end the accession of the [Diocese] to the constitution and canons of the Episcopal Church,” “would make clear the right to end any claim of spiritual or canonical authority of the General Convention over the [Diocesej,” and “would allow the [Diocese] to realign it self with another Province of the Anglican Communion.” According to Bishop Duncan. the proposed changes “are written in such a way . . that continuing membership in the Episcopal Church remains a possibility if the Episcopal Church were to reverse its ‘walk apart’ from the Anglican Communion”...

...“Anglican Bishops Take First Steps to New Structure” (September 29, 2007)
This news item posted on the Diocese’s website names Bishop Duncan as the “convener” of the first Common Cause Council of Bishops in Pittsburgh on September 25-28, 2007. The bishops of the Council, including Bishop Duncan, issued a joint statement that, among other things. “declare[s] clearly that we are taking this as a first step in the formation of the ‘separate ecclesiastical structure’ in North America”...

...Bishop Robert Duncan Addresses the I42 Convention to the Diocese” (November 2, 2007)
This item contains the text of Bishop Duncan’s address to his Diocesan Convention on November 2, 2007. In it he makes clear his view that there is no hope for reconciliation or healing within the Episcopal Church, but that separation from it is unavoidable. In his words, the Diocese has “come to a fork in the road” where different groups’ “understandings [of the Gospelj are... mutually exclusive, even destructive to one another.” Thus, “[o]ur differences arc presently irreconcilable.” As to disagreement within the Episcopal Church, “there is no prospect of resolution. only of a mediated separation.”

Further, in Bishop Duncan’s view, “[n]ational actions have now dictated that we must [choose between the national Church or the Diocese].” He reports that, for the majority of his Diocese, the choice of “realignment of the diocese with another Province of the Communion ould be preferable” to continuing what he describes as “the fruitless effort at continued federation with the Episcopal Church.”

We discussed the resolutions passed at Pittsburgh's last convention here. Basically, what they did was to insert a new Section 2 of Article I in the Constitution:

All references to the Episcopal Church were removed from the Constitution. Then they approved a new Canon:

The only reference to TEC is now within the Canons. To join another Province, according to the new Section 2, Article I of the Constitution, would no longer require a constitutional change (and two Conventions), but a simple canonical change (which, according to the current Canons, does not require the approval of two Conventions). At the same time, as long as the new proposed Canon that identifies the Province as TEC is in place, it was probably assumed that they would be protected from charges of abandoning the Church.

Apparently, the only person buying this slick move is Bp. Wimberly.

It is safe to assume we'll be reading about Bp. Iker in the near future.

UPDATE: There seems to be some confusion as to the process involved here. To help clarify things, note this quote from the Presiding Bishop's letter to Bp. Duncan:

According to the Canons, the consent of the Senior Bishops was needed only to inhibit. They cannot veto a deposition. The matter will still go before the House of Bishops after the required 60 days for Bp. Duncan to recant. Then, if a majority of the House gives consent, he will be deposed.

SECOND UPDATE: The first response from Pittsburgh is carried on their website under this headline: Effort to Inhibit Pittsburgh Bishop Unsuccessful. Nevermind that the charges against him were certified as valid by the Review Committee, meaning he will now face a vote by the House of Bishops to depose him. And his defense?

“Few bishops have been more loyal to the doctrine, discipline and worship of The Episcopal Church. I have not abandoned the Communion of this Church. I will continue to serve and minister as the Bishop of the Episcopal Diocese of Pittsburgh."

To accept the salary, pension and all other benefits of his office as a Bishop of the Episcopal Church while working for at least four years to establish "an alternative ecclesiastical structure" to replace the same Church that has nurtured him for all these years is a very bizarre expression of loyalty, it seems to me. Yes, he will continue to serve as Bishop...for 60 more days.
Posted by Jake at 10:24 PM