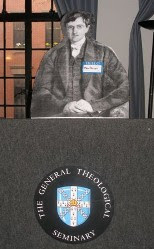 A meeting of the NACMHOOCICBW was held this evening at General Theological Seminary.

Mad Priest presided, although he was looking a bit thin and pale, most likely due to poor traveling conditions. 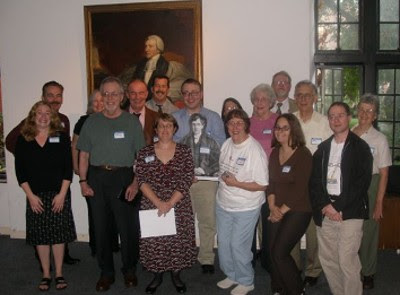 It was nice to finally meet some old online friends, such as Dennis, who did a wonderful job of hosting this affair; Dan, who I've known online for about five years now; Eileen, who is a member of a church just up the Parkway from me; KLady, with whom I share some memories of Wisconsin; Tobias, who I've met before, and already feels like an old friend. A number of this crew joined 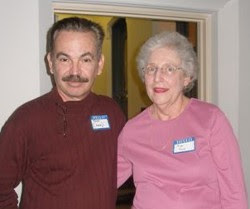 him and his parish yesterday for worship. And Grandmere Mimi, who proved to be every bit the Southern Belle that I imagined her to be.

Doug (of "blame Doug" fame) provided these pictures. Allie has some more pics up, for those who might be interested. I had a brief conversation with JohnnieB (did I spell that right?), which I hope we can continue another time. There were some other folks there that I really should have made more of an effort to get to know, but being somewhat introverted, (ok; an off the scale "I" according to Myers Briggs), I chose instead to chat with my friends Paul and Catherine.

After Evensong, we dined at Le Grainne Cafe, across the street from General. I barely had time to finish my meal before having to make a quick exit to make it to my 7:00 class.

And wouldn't you know it; shortly after that, Elizabeth arrived, and the party really got hot! Here's her version of events: 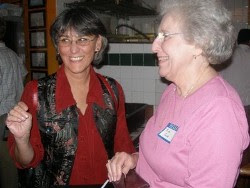 Ah, but not just any girl. I kissed Grandmere Mimi. AKA "Wounded Bird". AKA Ms. June of the House of the Louisiana Belles.

While the NYC paparazzi flashed their cameras to capture the moment, Ms. June exclaimed, her voice dripping with the tones of a true Southern woman in distress, "Oh, dear! I do believe you have made me a lesbian!"

To which I responded, "Well, if that's true, then I do believe you have made me straight!"

A great group. Quite mad, of course. But, that is to be expected, I guess, since it is our delight in the Priest Who is Mad that drew us together.