The Renegade Bishop of Bolivia 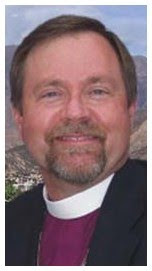 Frank Lyons, the Bishop of Bolivia, recently made a visitation in Evanston, Illinois:

...Lyons, 51, is not simply a visiting missionary however. He is overseeing this and 28 other congregations from Virginia to San Diego that have broken with the Episcopal Church over their interpretations of the Bible, a dispute that was spurred by the election of an openly gay bishop in 2003.

Lyons, a Wheaton College graduate, is emerging as a rallying figure for conservatives in the Anglican Communion, which includes the Episcopal Church. Saying the leadership has turned its back on these people, he is offering a haven to grateful parishes but angering church leaders who accuse him of using the denomination's divisions to promote himself.

His parishes, not wishing to separate from worldwide Anglicanism, turned to Lyons, an American who supervises four churches in Bolivia. Eventually, they plan to establish their own leadership.

Lyons has embraced what some congregations call "the Diocese of Bolivia's Northern Deanery" with zeal. In defiance of U.S. bishops, he ordains priests, lays hands on the sick and shrugs off complaints that his actions contravene church law and common courtesy. He ignores letters from other bishops asking him to stay out.

On Sunday, Lyons ordained a deacon in Evanston, entering the Episcopal Diocese of Chicago to perform an act that normally would be undertaken by the local bishop. He also is scheduled to meet with other area churches.

"It's schismatic," said Chicago Bishop William D. Persell. "I would have no intention of going into his diocese, for example, and ordaining somebody"...

The diocese of Bolivia, which previously had four churches and four clergy, is certainly growing. Although, some might question Bishop Lyon's form of evangelism, especially, it would seem, the "Windsor compliant" bishops currently meeting at Camp Allen. From the Windsor Report:

We call upon those bishops who believe it is their conscientious duty to intervene in provinces, dioceses and parishes other than their own:

Bishop Lyons seems to not care much for the Windsor Report. He's been making these raids quite regularly, at least since 2004. It's not as if he's discreetly plundering TEC, either. You may recall the Meeting of the Disgruntled held in Pittsburgh last November. Bishop Lyons was there, and brazenly wielded his episcopal authority:

...But the Windsor Report also asks overseas Anglican bishops to stop intervening in U.S. dioceses. At the closing Eucharist, Bishop Frank Lyons of Bolivia ordained three deacons and a priest to serve newly formed groups started by former Episcopalians in the U.S. "These men have been ordained to minister to those folks who cannot remain in communion with the Episcopal Church," Lyons said. He ordained the deacons for his own diocese, and the priest on behalf of Bishop Tito Zavala of the Diocese of Chile.

The priest, Eliot Winks, will serve the Church of the Resurrection in Baltimore. Of the deacons, William Haley will have a ministry among the poor in Washington, D.C.; Ian Crom will serve a congregation in Greenwich, Connecticut; and David Drake will serve Holy Trinity, a congregation in Raleigh, North Carolina.

The ordinations were termed "appalling" by Bishop Robert Ilhoff of Baltimore. "This is in violation of the Windsor Report, which called on bishops in various other parts of the Anglican Communion not to interfere with local matters," he said... 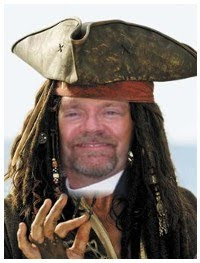 There was some degree of outrage following this blatant disregard for Anglican polity, but that doesn't seem to have had any effect on Bishop Lyons. His pillaging raids have continued.

What do we do with such pirates? Keel hauling comes to mind, but I suppose that is not too Christian of an idea. Canterbury seems too preoccupied with holding the center to be concerned about renegade bishops prowling the perimeter. Our own leaders seem helpless to prevent such raids. Me heartys, 't may be up t' us t' avast this scallywag.